Kids don’t play outside as much anymore. You don’t have to look up statistics to prove this; you can just look at your own neighborhood. Houses full of kids, streets empty of play.

Jean Twenge’s book iGen lays out some of the reasons for the decline in outdoor play. We can blame video games, phones, or lament a culture in which parents are increasingly uncomfortable with anything “unsafe,” but the result is the same: more kids indoors on their devices, while parents watch Netflix. The “free-range parents” who do allow their kids freedom outside get castigated by neighbors for their irresponsibility.

It remains to be seen what the full effect of such a cultural shift will be. In decades past, boys and girls had direct contact with nature. They knew thorns and flowers, dust and insects, mud and rock. You ran around in your bare feet and didn’t worry about hookworms or scabs or scratches. Your feet would develop marvelous callouses, and thank goodness, because bare feet are a lot better for racing and climbing, or wading in a pond or creek. And from time to time, you scraped your knee against the rocks of reality.

Our thumbs aren’t green anymore; they’re numb from swiping and scrolling. We prefer the comfort of the artificially engineered temperature of our home. We take pride in the persona we create online. We enjoy our freedom from the restraints of physicality and prefer a digitalized disembodiment.

But what does this do to us as people? What does it do to our worldview, our psyche, and our way of life?

The further we get from actual contact with thorns and thistles, isn’t it more likely we will fall for the idea that we are in control, that we are godlike in our powers, or that we can conform nature to our own wills? Isn’t it more likely that we will see nature as something endlessly bendable? Is there danger in the unscraped knee?

Victor Davis Hanson, in City Journal, reflects on splitting his time for the past forty years between writing books and working on a farm:

I cannot say that either world is nobler than the other. But I did learn that small farmers and farm laborers complained much less about their often-unenviable lots than did academics about their comparatively enviable compensation and generous time off. Working outdoors, often alone, with one’s hands encourages a tragic acceptance of nature and its limitations. Talking and writing indoors with like kind promote a more therapeutic sense that life can be changed through discourse and argument.

As I’ve read through the letters of C. S. Lewis, I’ve been astounded at how often Lewis chose to describe the land and the weather when writing his brother, Warnie, who was away in the war. This was a man of books and ideas who nevertheless knew and loved the place he lived. He let Warnie know where he walked; he described the color of the morning; he mentioned the planets; he called out the animals. He noted the feeling of walking on paths after rain versus walking paths during a time of drought.

Lewis’s mind was awake, yes, but so was his body. Perhaps this is why he wrote, in The Abolition of Man:

For the wise men of old the cardinal problem had been how to conform the soul to reality, and the solution had been knowledge, self-discipline, and virtue. [Today] the problem is how to subdue reality to the wishes of men: the solution is a technique.

Rusty Reno sees benefit in outdoor work, precisely because it challenges the view that we can subdue reality to our wishes without conforming ourselves to the way the world works:

Those who work outdoors must grapple with the recalcitrant realities of the natural world, and this work reminds them of their finitude. The world, however beautiful and awesome, is not always pliable. The sun scorches at midday. It’s hard to gain footing in muddy, rain-soaked soil. This can weary and frustrate us, but for the working man these circumstances don’t lead to resentment. The world is what it is.

By contrast, today’s intellectuals picture most of life as invented. We speak of the ‘social construction of reality.’ Postmodern theories insist that our desires and feelings are conjured by political forces. This encourages us to translate life’s inevitable frustrations into conspiracies against our happiness.

There’s a world outside. We don’t all need to be outdoors enthusiasts, hunters, hikers, or gardeners. But we should at least ask ourselves the question of how our current practices are shaping our society? What is the future for a culture that has forgotten its limitations, or ignored the importance of acknowledging and conforming to creation as it has been given us?

We need to be reminded of the limits of our autonomy, especially in an age in which we control the temperature of the seats in our cars or at what age the gray in our hair shows. Technology enables us to see the face of a loved one on the other side of the world. With a click of a few buttons, food shows up at our front door.

Still, we can’t prevent the rain from falling. Bad weather will always confound the control freak. The upside is that nature’s resistance to bend to our will reminds us of our frailty and points to the sovereignty of the One who scattered the stars. And we need this reminder more and more, for danger lurks in the never-scraped knee.

This blog post originally appeared at Trevin’s blog on The Gospel Coalition. 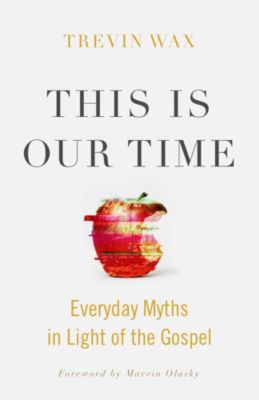 This Is Our Time

How can we resist being conformed to the pattern of this world? What will faithfulness to Christ look like in these tumultuous times? How can we be true to the gospel in a world where myths and false visions of the world so often prevail?

Trevin Wax is senior vice president of Theology and Communications at LifeWay Christian Resources and a visiting professor at Wheaton College. He is the general editor of The Gospel Project, and the author of multiple books, including This Is Our Time, Eschatological Discipleship, and Gospel Centered Teaching.. A former missionary to Romania, Trevin hosts a blog at The Gospel Coalition and regularly contributes to The Washington Post, Religion News Service, World, and Christianity Today, which named him one of 33 millennials shaping the next generation of evangelicals. He and his wife Corina have three children.