Leaving the nest is an important life transition for both parents and kids. We started our empty nest season four years ago and the water is just fine, although letting them go was much harder than we had anticipated.  Some parents are reluctant to let go of their parenting role when their kids become adults. The first step to letting your kids become adults is to realize they are no longer kids. The second step is to trust God with their future.

A brave example of letting go comes from Jochebed and Amram, the parents of Moses. Their faith is on permanent display with other heroes in the Hebrews 11 Hall of Faith. “By faith Moses, after he was born, was hidden by his parents for three months, because they saw that the child was beautiful, and they didn’t fear the king’s edict” (Hebrews 11:23).

“When God’s plans don’t match up with our plans, will we trust Him more than we trust ourselves?”

They were also raising a teenage daughter and a three-year-old son when Moses was born. Their example gives us three reminders as to why we should trust God with our kids.

1. God loves them more than we do.

Jochebed, Miriam, and even the midwives feared God more than they feared Pharoah. The Egyptian princess couldn’t kill baby Moses either. All of these brave women had a hand in protecting baby Moses, but the ultimate hero is the Lord God.

Parents and grandparents do not need to beg God to save our kids. Jesus is more interested in their salvation than we are, and He has already implemented their ultimate rescue from sin and death.

2. God has a perfect plan for their lives.

Jochebed’s Plan A to hide Moses was brave, but it didn’t work for very long (three months). What happens when you huddle up and call a parenting play that doesn’t work? You try something else! Floating Moses down the Nile River seemed like a pretty bad parent play until you realize how desperate they were. Are you desperate enough to trust God for divine intervention right now?

God’s plan was even better than Jochebed’s plan. Even in her wildest dreams, she could not have foreseen getting paid by the princess to feed and raise her own son! This could have arguably been history’s first Mother’s Day.

One parenting temptation is to tell our kids they can be anything when they grow up. No, they can’t! God hardwired them to do some things well and other things poorly. I’m terrible at math. How do I know? My teachers gave me feedback in the form of grades. This kept me from foolishly following in my dad’s career as a CPA.

Moses’ parents saw God as more than a senior partner in parenting. When God’s plans don’t match up with our plans, will we trust Him more than we trust ourselves?

3. They were temporarily entrusted to us.

“When the child grew older, she brought him to Pharaoh’s daughter, and he became her son” (Exodus 2:10).

Jochebed had to give Moses up twice, first as a newborn, then later as a preschooler. I suspect she probably also had to let him go emotionally when he was exiled from Egypt for four decades.

As persistent and courageous as Jochebed was, only God could write the script for Moses’ life: As the emancipator of Israel, he led at least 2 million slaves out of the grasp of the world’s greatest superpower of that day. As a lawgiver, he would write the first five books of the Bible, which the most conservative of Jews had memorized. He even wrote the first song in Scripture (Exodus 15:1-19).

When Moses became an adult, he may have needed his parents, but he stopped needing to be parented. Jochebed and Amram’s greatest legacy was that they trusted God with their three kids. Adulting is hard on both the kids and parents, so put an end to second-guessing. Instead–entrust God with your kids by letting them grow by letting them go. 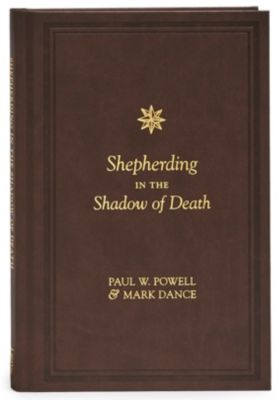 Shepherding in the Shadow of Death

One of a busy pastor’s sacred tasks is to shepherd people through the valley of the shadow of death. Funeral messages are usually needed on short notice, and are in addition to the many other preaching and ministry responsibilities that you have each week.

Mark Dance, D.Min. is the Director of Pastoral Development for Oklahoma Baptists, and Executive Director of Care4Pastors (care4pastors.com). He frequently speaks at churches, conferences, and retreats. Read more from Mark at markdance.net.