Tim Tebow has a long list of accomplishments. He is a Heisman Trophy winner. He is a National Champion. He is a first-round draft pick in the NFL. He is an author of a few books. He is the leader of a life-changing foundation. But before all of that, he is a follower of Christ.

It was 2009 and Tebow was playing college football at Florida. He was weeks away from competing in the highly televised national championship football game when God led him to write John 3:16 under his eyes for all the world to see while he played. What happened next was no coincidence, but God working through a small act of courage that He used to do amazing things.

When I was at the university of Florida, going into my junior year, we were getting ready to play a rival. And I was in the training room and I was getting stretched by one of our trainers. And I looked over and I saw some of my teammates putting eye blacks under their eyes.

And so I started to think – you know, they’re, like putting their mom’s name or their area code and different things like that. I started to think, you know, “I wonder if I could put an eye black and put, grab a silver sharpie and and put something on there that could be encouraging or inspiring or – I don’t know – uplift somebody.”

So I put Philippians 4:13 under my eyes and we went out there and played. And honestly, it really wasn’t a big deal. A couple local newspapers wrote about it, but it wasn’t that big of a deal.

But I kept wearing it under my eyes every single week. And, as most of you know, fans in the SEC are extremely passionate about your teams. So the next couple weeks they start selling it at the Gator bookstore, on the sides of the streets. They’re selling Philippians 4:13. I’m seeing fans and they’re like, “Alright. Go Gators! Philippians 4:13!” I’m like, “You don’t even know what that means.”

I actually had one guy come up to me. His name was Phil and he said, “Did you put that under your eyes for me?” What? No. What does the 4:13 mean?

But I kept wearing it under my eyes the entire season. And we get to the SEC championship game against Alabama. [crowd cheers] Calm down.

Well at this moment, I really felt like God was putting it on my heart to change the verse. I was like, “Really? Right now?” But I kind of stepped back for a second and realized that if we won, we’d be playing in the national championship and that would be maybe the biggest stage that I would ever get to change the verse and put something meaningful on there.

So we were blessed to win and the next six weeks leading up to the national championship game, I was contemplating, really agonizing, over what verse I was going to go with. But God kept bringing to my heart and my head John 3:16. Because as a Christian, that’s the essence of our Christianity, it’s the essence of our hope. “For God so loved the world that He gave His only begotten Son that whosoever believes in Him will not perish, but have everlasting life.” That’s what we believe in as Christians. So I decided that’s the verse I’m going to go with.

Two nights before the game, I go into my parent’s hotel room in Miami, Florida. And they open the door, and I was like, “Alright, Mom, Dad, I’m gonna change the verse.” And my mom’s super supportive and my dad’s like, “Have you told Coach Meyer?”

Because Coach Meyer says he just likes his routines, but that dude is so superstitious it’s ridiculous. If we win with long socks, next week they’re even longer. Whatever is working he’s going to stick with it. So, he was like, “You really need to talk to him.”

So next day we have our walkthrough. After the walkthrough finishes, I was like, “Hey, Coach Meyer, can I talk to you?”

I said,– He’s like, “How is your arm? Your leg? You feeling good? You got the game plan down?”

“WHAT? What are you talking about? You can’t change the verse. That verse got us here!”

So I explained to him why I wanted to go with John 3:16 and he understood and he was supportive. And honestly really, after that moment, I didn’t really think about it.

The next night, I just went out there and we were blessed to win the national championship. And two days after that game, I was sitting in Ballyhoo restaurant eating grouper with my mom, my dad, one of my aunts, and Coach Meyer.

And Coach Meyer gets a call from our PR guy at Florida, and he’s like, “Mhm. Mhm. Mhm. Alright, bye.” And I looked at him and I was like, “What was that all about?” He told me who it was, our PR guy, and he said, “Timmy, he just told me that during that game 94 million people googled John 3:16.”

And honestly, my first thought was, “How the heck do 94 million people not know John 3:16?” It’s like, it’s Sunday school, bro. That’s the first thing you hear.

What was really cool about that game is it was on January 8th of 2009. Well exact three years later, January 8th, 2012. Exactly three years later to the day, we just happened to be playing the Pittsburgh Steelers in the first round of the playoffs. I didn’t think of John 3:16 one time, so I can’t take credit for it. I had nothing to do with it. I just went out there and tried to do anything I could to try to win a playoff game.

And we were blessed to win this crazy game in overtime. After the game, when we were done celebrating, I changed really quick, and I was going down the hall to do my press conference. And I was really looking forward to it, because I love talking to the media.

And so, I was getting ready to turn left and go into these curtains to talk to the media. And Patrick, our PR guy, steps in front of me and says, “Timmy, did you realize what happened?”

And I was like, “Yea. We just beat the Steelers. We’re going to play the Patriots. Like, let me do this.”

He was like “Timmy, did you realize what happened?”

I could tell he was being serious, so I was like, “Patrick, what’s up man?”

He looks at me and says, “Timmy, this is exactly three years from the time you put John 3:16 under your eyes.”

I was like, “Oh really? That’s awesome. That’s really cool.”

And I was just standing in that hallway, thinking, “God, I didn’t know that You were doing anything.” Like, I thought that was like three years ago.

But it’s amazing how big the God is that we serve. He took something that I did three and half years ago, to make a decision to put Philippians 4:13 and then change it for one game. But I thought, “Hey, this is really cool. We impacted some people, but it’s done.”

But no, God has an awesome plan. He has an awesome plan and you might not even see what He’s doing. You might not even know how He’s working. But the amazing thing is, when we step out and we show a little courage. We step out and we show a little boldness, what God can do with it in our lives, through our lives. But He’s a big God. He’s a big God and He can perform miracles. He can perform miracles. I really believe that He wants to. 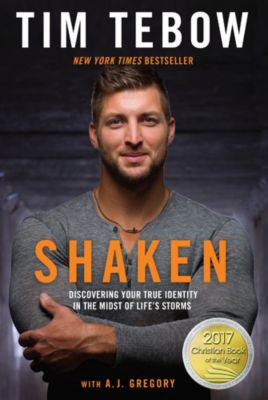 In Shaken, named the 2017 Christian Book of the Year, Tebow talks about what he’s learned along the way, building confidence in his identity in God, not the world. This moving book also features practical wisdom from Scripture and insights gained from others who have impacted Tebow in life-changing ways.

Tim Tebow is a two-time national champion, first round NFL draft pick, and Heisman trophy winner. After playing in the NFL for the Denver Broncos and the New York Jets, Tebow joined the SEC Network. In addition to his role on SEC Nation, the network's traveling road show, Tebow also contributes to a variety of other ESPN platforms. In 2016 he signed a professional baseball contract with the New York Mets. Through everything Tim's true passion remains the work of the Tim Tebow Foundation, which he began in 2010.