For the month of May, the United States has been observing Asian Pacific American Heritage Month. In this video, we asked speaker, author, and Bible professor, Dr. Christopher Yuan, how Christians, and specifically White Christians, can better love their Asian brothers and sisters.

How can my Caucasian Christian brothers and sisters walk alongside other Asians, and specifically Chinese-American or Asian-American believers?

We need to recognize the context in which many Asians and Chinese-Americans, Asian-Americans, live here in America. We’re kind of stuck between two different generations and two different understandings. Also, especially in the context of talking about race, I think Asians often feel like sort of left out of the picture.

Knowing the background, many of the Asians who came here from whether China or Korea or Japan or other countries in the Far East, they left a lot to come here and they worked their tail off to come here. So there’s a sense where we have elevated this concept of pursuing the American Dream as the goal in life. That then has crept down to us, the second generation of Americans. So recognizing that that can sometimes color how we view things. Education is high priority. Career is high priority. Helping us to center that those things are important, but it’s not the most important thing. It is what is the will of God, whether you are surrendering everything that you are to Him.

But there’s also this tough paradigm that we, as Asians, live in because there’s a sense in which we can say that we don’t receive much privilege because we’re a minority. But also there’s a sense in which we do receive some privilege, such as with parents who are together, husband and wife. Family is such a big priority. Education is a big priority. And because of the hard-working parents, they often, even though they started with nothing coming to this country, within a few years accumulated a lot of wealth and live well. So in a sense I view that as a privilege. So understanding that though privilege is an issue, but it’s something that Asians kind of see both sides of the coin.

But honestly, for me, I view that above everything that though racism and privilege are issues, at the core of all of this I see these really as secondary issues. At the core we all are wrestling with our own sin nature. Racism and privilege stem from a sin nature. You go to Asia and there is racism there—believe me—and there’s very few Caucasians.

So the problem is our sin nature and what we need to all be reminded of together is that sin is a problem, Christ is the answer. If Christ is the answer then that also means that the body of Christ, the local church, has to be involved. So help us to be involved and connected with the body of Christ so that we, together, can live in victory in Christ by grace through faith. 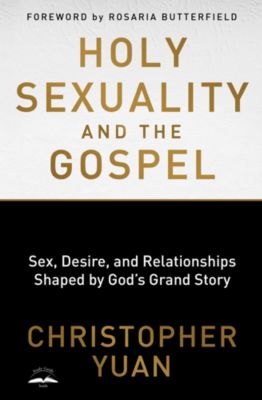 Holy Sexuality and The Gospel

Whether you want to share Christ with a loved one who identifies as gay or you’re wrestling with questions of identity yourself, Holy Sexuality and the Gospel will help you better understand sexuality in light of God’s grand story and realize that holy sexuality is actually good news for all.

Dr. Christopher Yuan has taught the Bible at Moody Bible Institute for over ten years and his speaking ministry on faith and sexuality has reached five continents. He has co-authored with his mother their memoir, Out of a Far Country: A Gay Son’s Journey to God, A Broken Mother’s Search for Hope He is also the author of Giving a Voice to the Voiceless and his newest book, Holy Sexuality and the Gospel: Sex, Desire, and Relationships Shaped by God’s Grand Story.