In a time of intense division about a wide variety of political and theological issues in American evangelicalism, President of The Southern Baptist Theological Seminary, Dr. R. Albert Mohler Jr. discusses how pastors and church leaders can address cultural issues in constructive ways that build up the Church without creating unnecessary division.

When you think about so many of these issues and in a time in which we really have an unprecedented political polarization in the modern United States. We have to remember there’ve been other moments in American history in which there’s been extreme polarization, even a Civil War. But in modern America, we really are at a new point.

And the question is then: how do we discuss these issues? Which, after all, Christians have to think about and we have to decide about. Eventually, in many cases, we have to vote about.

How do we make clear where there is an essential ground on which Christians must stand united in truth and in the gospel and where there are issues in which biblically-minded, gospel-hearted Christians can be in a constructive disagreement?

This actually calls for something Christians think they’re good at, but often are not, which is conversation. Christians, we really think we’re a conversational people, but in reality we tend to have conversations that avoid the things we really need to be invested in with each other. We need to trust one another enough in the gospel, in the Scripture, in the Lordship of Jesus Christ exercised in the Church, to have conversations that just might risk the fact that we might discover we actually aren’t – beginning at least – in absolute agreement. 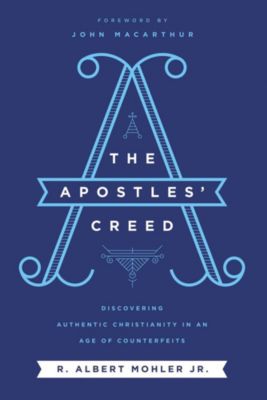 In The Apostles’ Creed, renowned theologian and pastor R. Albert Mohler Jr. works line-by-line and phrase-by-phrase through each section of the Creed, explaining in clear terms what it means and how it equips Christians to live faithfully in a post-Christian culture.

Dr. R. Albert Mohler Jr. serves as president of The Southern Baptist Theological Seminary – the flagship school of the Southern Baptist Convention and one of the largest seminaries in the world. Dr. Mohler has been recognized by such influential publications as Time and Christianity Today as a leader among American evangelicals. In fact, Time.com called him the “reigning intellectual of the evangelical movement in the U.S.”