On a brilliantly sunny day, my colleague and I were driven from Cape Town to very near land’s end in South Africa: Cape Point. There we stood at the edge of terra firma and watched as the waters of the calmer Atlantic and the restless Indian Oceans collided into one massive torrent of fluid strength, the power of the current almost visible to the naked eye. That body of water has been the graveyard of many mariners trying to navigate their way around the globe. The endless horizon, the borderless blue and turquoise of the mighty waters, and the frothy white tips of the crashing waves as they collided against each other—this scene from the world’s end seemed to just overwhelm us with a stupendous sense of awe.

“The connecting of faith and reason is the wonderful journey of the soul.”

Yes, I have seen many of the so-called wonders of the world. But this was sheer enchantment, not made by human hand! Whether it was because we were not expecting such a banquet for the eyes, or whether it was that we needed refreshment after a busy day, I would not even venture to analyze. All I know is that it affected both of us in the same way. For seemingly unexplainable reasons, my eyes filled with tears. I was in the throes of enjoying the wonder and the vastness of creation. I felt at once both dwarfed and elevated. My entire stature as a human being seemed so diminished compared to this display of beauty and power but nonetheless, I could revel in this glorious sight—while the land and water combined could not exult in its own beauty or share in any delight.

Then a strange, unexpected sensation took hold of us, and we both did something that neither of us had ever done before. We walked back a few steps, found a sharp stone, and scratched the names of our wives onto the surface of a massive piece of rock. We realized that in a matter of days, the writing would be erased, but the thought and act spoke volumes. We had been in the throes of wonder and it just seemed incomplete that we could not enjoy it with the ones dearest to us and express something from the overflow.

Questions like “What is your favorite destination?” are relatively easier to answer. But then there are those such as “How can I know God exists?” or “Why is there evil in this world?” that call for answers with universal implications and reveal that the deepest questions span both the mind and the heart.

Questioning is the way of humanity. We will always ask, debate, challenge, and search. However, there is an immense difference between a worldview that is not able to answer every question to complete satisfaction and one whose answers are consistently contradictory. There is an even greater difference between answers that contain paradoxes and those that are systemically irreconcilable.

The Christian faith stands out as unique in this test, both as a system of thought and in the answers it provides. Christianity does not promise that you will have every question fully answered to your satisfaction before you die, but the answers it gives are consistently consistent. There may be paradoxes within Christian teaching and belief, but they are not irreconcilable.

I often put it this way: God has put enough into this world to make faith in Him a most reasonable thing. But He has left enough out to make it impossible to live by sheer reason alone. Faith and reason must always work together in that plausible blend.

The Deep Longing of the Human Heart

Deep within every human heart throbs the undying hope that somebody or something will bring both an explanation of what life is all about and a way to retain the wonder. Yet if we would but pause and ponder what it is that we already see in this world, we might get a brief taste of the wonder that may be poured into us as well.

The connecting of faith and reason is the wonderful journey of the soul. When one’s thinking is set aright again and when the flesh has its shackles broken, the mind and body come under God’s liberating and fulfilling plan. Then we see as He designed us to see. When we come to know our creator, the questioning is not for doubting but for putting it all together and marveling at his wonders.

This post is an excerpt from The Logic of God. 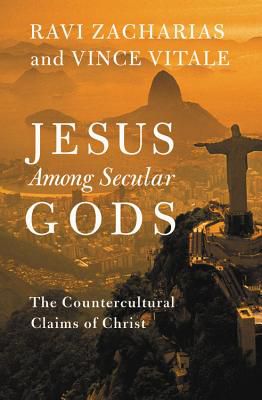 As belief in the secular gods of atheism, hedonism, relativism, and humanism continues to grow, it’s more important than ever for believers to be able to defend and share the claims of Christ. Learn how to confront the empty promises of cultural philosophies and develop confidence sharing the claims of Christ.

Ravi Zacharias is President and Founder of Ravi Zacharias International Ministries (RZIM). Their global outreach grew from humble roots in 1984 and includes fielding a team of itinerant speakers who operate from offices located around the world including the U.S., the UK, Romania, the Middle East, India, Singapore, Hong Kong, and Canada.