“To the only God, our Savior, through Jesus Christ our Lord, be glory, majesty, dominion, and authority, before all time and now and forever. Amen.” – Jude 25, ESV

Amen is used regularly by Christians during and after fellowship, prayer, worship, and the preaching of God’s Word. Most of us have a sense of what we are intending to communicate by saying amen, and some of us don’t. But this word holds weight, much of which is lost on us. Maybe because of the frequency with which we say it or because we haven’t studied its use in the Scriptures, which would provide theological depth to a seemingly common word. So let’s take some time to learn about it from God’s Word so that we can understand what Jude was expecting of all who would read his letter, then and now.

“Amen: Hebrew word meaning ‘so it is’ or ‘let it be,’ derived from a verb meaning ‘to be firm or sure.’ Some translations of the Bible always retain the Hebrew word amen in the text. Others translate it by an expression such as ‘truly’ or ‘I tell you the truth … ‘ 1
—Walter A. Elwell and Philip Wesley Comfort

Affirming What Is True

If all of the people were to say “amen” after hearing all of the judgments that awaited the wicked, what would their response have signified?

We are used to hearing amen proclaimed after a blessing has been spoken, but rarely—well, at least in my context—do we hear it as a response to curses. It might seem unloving or “intolerant” for God’s people to say amen to the pronouncement of judgment on the wicked. Similar to this portion of Deuteronomy, Jude’s letter spoke about the judgment awaiting the ungodly as well.

If after these curses were pronounced and God’s people refused to say amen in response, they in essence would have been saying, “We don’t agree with what has been said. And we don’t affirm it as true.”

Our amens should be informed by our faith and not merely by our opinions.

That being the case, why is it a good thing for them to say amen?

When what has been spoken is biblical and therefore true, whether in preaching, prayer, worship, etc., our amens should be informed by our faith and not merely by our opinions.

To say amen in response to the pronouncement of judgment is not an act of rejoicing. We don’t delight in the reality that God will execute judgment on the ungodly (Jude 15). We do trust that because God is good (Psalm 119:68) and wise (Romans 11:33) and His judgments are just (Revelation 19:2a), to say amen is simply to affirm that what He’s said (through His Word) will happen. To disagree with His Word is ultimately to disagree with Him.\

Find the word that Jesus uses twice in the passage above. In Greek, this word is amēn with its origins in Hebrew. 2

The use of amen in response to curses for the people of God would be a “so it is” and “let it be” (from the definition above). Jesus was using it differently in that here it wasn’t in response to something spoken but it preceded what He spoke.

Jesus spoke with authoritative certainty. What follows ”Truly, truly” or “Amen, amen” should be taken with the seriousness and faith that they deserve. In other words, Jesus was essentially saying, “What I am about to say is entirely true and important, so listen.”

Coming back around to Jude’s doxology:

“Now to him who is able to keep you from stumbling and to present you blameless before the presence of his glory with great joy, to the only God, our Savior, through Jesus Christ our Lord, be glory, majesty, dominion, and authority, before all time and now and forever. Amen.” – Jude 24-25, ESV

The last word of Jude’s doxology is so much more than a popular way to close. With amen he pointed to what God will do (v. 24) and who God is (v. 25), and he is beckoning all the saints who have been called by this glorious God, loved by this majestic God, and kept by this authoritative God to express the truthfulness of his words with an amen. They were certain what He’d said would happen. They were in full agreement in their hearts and with their mouths that God is all of the above and more.

The same cannot be said of the ungodly in Jude’s letter. They had denied God; but as for the godly, they believed Him. All the promises of God are yes (amen) in Jesus Christ (2 Corinthians 1:20), so there is even more assurance that God will keep His word (every iota) to them. They are in Him. They have been brought near to God through Him. And they are being kept by Him. What better way for Jude to end his letter than in praise?

Praise to the only God, our Savior, through Jesus Christ our Lord. To Him, be glory, majesty, dominion, and authority, before all time and now and forever. 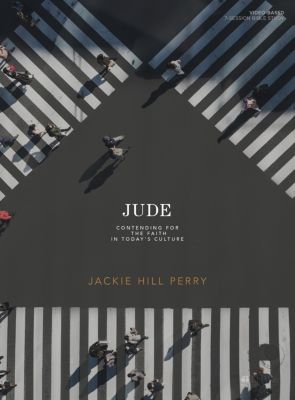 In this 7-session study from Jackie Hill Perry, dive into themes of being called, loved, and kept, and learn how to point others to Jesus in grace and truth. We serve others well when we share the whole gospel with them, not just the parts deemed attractive by our culture.